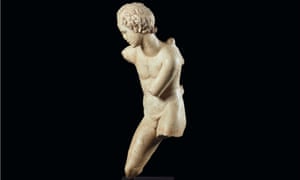 The 94cm Roman marble of Eros is estimated to fetch as much as £800,000 at auction. Photograph: Christies

Article copied from the Guardian, written by Dalya Alberge, November 24, 2019.

Christie’s urged to pull sale of Roman statue ‘linked to illicit dealers’. Art expert says he has evidence first-century Eros marble was in archive of disgraced dealers. A leading archaeologist is calling for Christie’s to cancel the auction of a first-century Roman statue because of its alleged links to “notorious dealers connected with numerous cases of illicit antiquities”.

Prof Christos Tsirogiannis’ claims relate to a marble depiction of Eros unstringing his bow, which is due to be sold on 4 December.

However, Tsirogiannis says he has four photographs of “exactly the same object” in the possession of the disgraced dealer Robin Symes and his late partner Christo Michaelides, whose archives were seized by police and held by authorities in Greece and Italy.

Tsirogiannis, a former senior field archaeologist at Cambridge University’s archaeological unit, was recently appointed associate professor at the Institute of Advanced Studies, University of Aarhus, in Denmark. Greek and Italian authorities gave him official access to confiscated archival material as his academic research has focused on antiquities and trafficking networks. Over 13 years, he has identified about 1,100 looted artefacts within auction houses, commercial galleries and private collections. Notifying Interpol and other police authorities, he has played a major role in securing the repatriation of many antiquities to their country of origin.

Tsirogiannis says these disgraced dealers were the main providers of classical antiquities to Symes and Michaelides.

In 2005, Symes served a jail sentence for disregarding court orders over the sale of a £3m Egyptian statue. The judge described his explanation as “a calculated deception”. In 2016, Italian and Swiss police recovered marble statues and other treasures stolen from Italy. They had allegedly been stored by Symes at the Geneva Freeport in Switzerland.

Tsirogiannis said Christie’s had failed to make adequate checks with Greek and Italian authorities. “Here we have the much-advertised due diligence process of Christie’s that has largely failed since it missed the most important part – the connection to Symes and Michaelides, notorious antiquities dealers connected with numerous cases of illicit antiquities.”

Christie’s lists the Eros statue as “the property of a gentleman”. Under the provenance, it states: “[Writer] Roger Peyrefitte (1907-2000) collection, Paris, said to have been acquired from [dealer] Nicolas Landau in the late 1960s. French private collection, purchased from the above in 1986.”

Tsirogiannis described the phrase “said to be” as unacceptable and showed that the provenance was “uncertain”. “Christie’s should withdraw the piece and contact the authorities [who will] tell them what to do.”

He said this case was the latest example of a major auctioneer failing to make adequate checks with the authorities. In 2014, he identified five antiquities of dubious origin in a Christie’s New York sale: “One of them, a prehistoric Sardinian idol, was presented as the property of one of the most important private antiquities collections in the world. However, I identified the same idol in the Medici archive … [and] all the objects were withdrawn before the auction … Three years later, the object was confiscated from the same collector based on evidence I had given.”

Tsirogiannis dismissed claims by auction houses of a lack of access to the seized archives: “They do have access to them. They just choose not to have by not sending photos of the objects to the authorities before they put together the catalogue.”

He described the Eros statue as “an extremely important and beautiful object”, adding: “A potential buyer’s investment and reputation will be at stake if, in due course, any proof of its illicit origin appears.”

A Christie’s spokeswoman said: “Following extensive research, we have found no grounds under which title to sell can be questioned. Christie’s would never sell anything having reason to believe has been stolen or inauthentic. We devote considerable time and money to investigating the objects in our care. We consult academic, police, civil, national and international lists of stolen works and when we publish our catalogues we welcome scrutiny to help us ensure our information is correct.”

She added: “We deliberately publish our catalogues well in advance to allow any additional information to come to light in our efforts to ensure only objects with proper title are sold.

“We also send our catalogues to all embassies and those who hold archives as an additional safeguard.”

But Tsirogiannis said he did not receive a catalogue from Christie’s. “Every argument … in their official statement … is blown up by their own phrase: ‘said to be’.”