Dr. Christos Tsirogiannis, Associate Professor at the Faculty of Arts, Museum of Ancient Art, University of Aarhus, identified again two objects connected to Symes, Becchina and Medici in the upcoming antiquity auctions of Christie’s and Sotheby’s.

Aphrodite’s head from the confiscated Symes and Michaelides archive (left) and from a screenshot from Sotheby’s (Nov. 28, 2018)

Aphrodite’s head from the confiscated Symes and Michaelides archive

Although this image is not a proof of an illicit activity, Sotheby’s start their ‘Provenance’ section with Symes; since Symes and Michaelides were probably the most notorious antiquities dealers in modern times, with numerous antiquities already proved to be illicit and repatriated as such, the least that Sotheby’s should have done is to present proofs (for their customers, researchers and the public) that this marble head is absolutely legal beyond any doubt, and not unprovenanced or illicit; the Sotheby’s catalogue contains no such proof or even an indication.

Greek vase from the Becchina archive

On the right, Christie’s lot 126 (Greek vase), is depicted (right) and as it was found in the Becchina archive (left), before conservation and restoration, with encrustations and a quite distinctive flake missing from its center of the decoration; comparing it with the Christie’s catalogue image, the encrustations have been removed, the vase is clean, and the missing flake coloured over with black paint. Moreover, the invoice from Becchina to Termer (third image), which was discovered in the Becchina archive, is shown; this connects the vase to a notorious and convicted illicit antiquities dealer (Becchina), and disproving the date in which the final transaction between Becchina and Termer took place (not 1986 as Christie’s state, but 1987, as the invoice states, although a ‘pro forma’ invoice dated 12/12/1986 is also mentioned). Christie’s, once again, fail to refer to the earliest provenance of an antiquity, which usually, when identified, coincides to be a known trafficker. 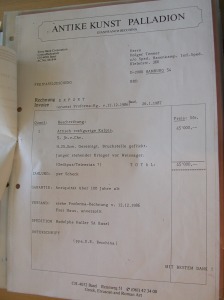 invoice from Becchina to Termer (1987)

It seems quite systematic that neither Sotheby’s nor Christie’s ask Italian authorities to check on the objects they put on auction as almost at every antiquity auction objects connected to Symes and Becchina appear.

INTERPOL, the Carabinieri and the Scotland Yard’s Art and Antiques squad are already informed.