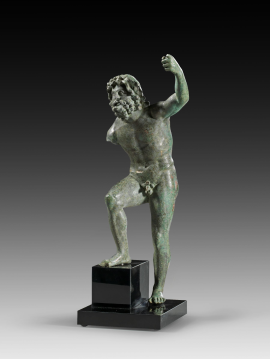 A recent article from the German TV-Channel ‘Das Erste’ by Andreas Wolter (in German) discusses the unsecure provenance of a Poseidon statuette recently sold at Gorny & Mosch in Munich (though the auction house is not mentioned by name). The auction house names as provenance only ‘Ex collection A.T., Munich, since 1985’. But the statue was on the black market in Bulgaria in 2008.

The article refers to an anonymous email, which ‘Das Erste’ team received before the auction took place, claiming that some of the objects sold at the auction house were offered on the black market several years ago in Bulgaria. As a proof, a Bulgarian newspaper article from 2008 was attached. Desislava Tancheva, the Bulgarian journalist, who published the same statuette on October 31, 2008 (download the article here) in the journal ‘cash‘, was immediately dismissed afterwards. Her article discusses the selling of coins with a striking resemblance of those robbed in 2005 from the Museum in Veliko Tarnovo, Bulgaria, and, amongst other finds, also the Poseidon statuette, as well as a certain Aleksandar Chochkov, born 1974, who is allegedly involved in trafficking cultural objects. He sold the Poseidon statuette, more precisely, the same, which was recently sold at Gorny & Mosch at the auction no. 239. One might doubt he was already in the possession of the statuette in 1985.

The team of the German TV-Channel meets the writer of the email, who hands them over other images of objects offered to him for sale in September 2015. The team of the German TV-Channel travelled to Bulgaria, trying to find more information about ‘Aleksandar T.’. Desislava Tancheva and an anonymous informants tell the TV-team that there is a flourishing trade between Bulgaria and different auction houses and antiquity dealers in Munich. And that disturbing this business might be lethal, since it reaches deep into the government. The article itself had no consequences in Bulgaria, since Alexsandar Chochkov seems to have excellent contacts to the Bulgarian police and the former secret service.

Needless to say that the auction house does not want to give any information about the previous owner ‘A.T.’ of the statuette. Instead, they inform that they check every item with a value over € 1,000 with Interpol and the Art Loss Register. Here one can find information about stolen art and antiquities, but nothing about any find which was excavated illegally.

screenshot from the video of ‘Das Erste’.

A similar case is lot 5 from the same auction, a Herakles statuette: provenance, again, ‘Ex collection A.T., Munich, since 1985’, and offered in September 2015 to the anonymous informant of the TV-team right after excavation, and unrestored.

One of the problems is that only for antiquities sold or brought into Germany AFTER April 26, 2007, a valid export permission by the state in which territory it was found is necessary. Something which is easily to evade by claiming that the object derives from a private collection, which bought it before 2007.

All information in this blog entry derives from the article and video by ‘Das Erste’ and the Bulgarian newspaper article by Desislava Tancheva.