This week, our committee member Dr. Christos Tsirogiannis, senior archaeologist at the Cambridge Archaeological Unit, University of Cambridge, identified again several objects of very doubtful provenance in a forthcoming auction; this time it is the auction of Gorny & Mosch in Munich on December 14, 2016. The four identified antiquities derive from the Robin Symes and the Becchina archives, which was not mentioned in the object’s description by Gorny & Mosch.

The following antiquities were identified: 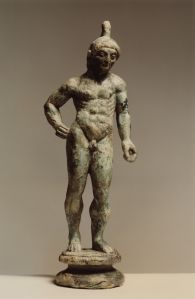 It is worth to note that Royal Athena Galleries, owned by Jerome Eisenberg, have previously offered for sale antiquities stolen from museums in Italy and Greece, and several other objects have been repatriated to Italy as illicit. Nevertheless, in June 2012 the Italian state (well, G. Napolitano) awarded a medal to Jerome Eisenberg.

The same figure was already identified by Dr. C. Tsirogiannis as deriving from the Symes archive while it was on offer in Royal Athena Galleries on October 2010, among several other antiquities from the Medici and the Becchina archives. In January 2011 these identifications were presented in brief by Professor David Gill through his ‘Looting Matters‘ blog (two articles; find them here and here) and by the Italian journalist Fabio Isman in Il Giornale dell’Arte.

It is worrying that though two out of these three publications are accompanied by the image of the Etruscan figure from the Symes archive, the figure re-appears now for sale again; this means that the Italian authorities did not act in 2011. 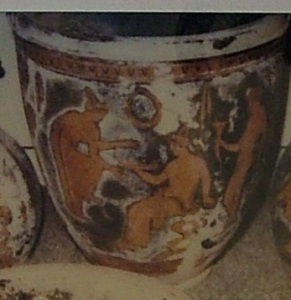 This vase is depicted covered with soil and salt encrustations, among other antiquities in the same condition, in an image from the Becchina archive (see image on the right). A handwritten note indicates that the images were sent from Raffaele Montichelli, a convicted antiquities trafficker, to Becchina on 18 March 1988, which pre-dates by far the collecting history given by Gorny & Mosch. 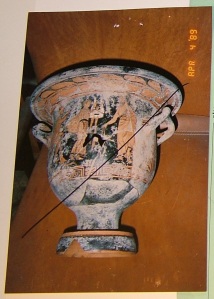 Lot 88 from the Gorny & Mosch auction December 14, 2016: Image from the Becchina archive

Gallery ‘Palladion [Antike Kunst]’ was Becchina’s gallery in Basel. Therefore, it is not a surprise that this krater, too, is depicted in an image from the Becchina archive (see image on the right), covered with soil and salt encrustations, as various fragments put together but still missing a few from the centre. The date printed on the image reads ‘APR 4 ’89’ (4/4/1989), making the attested involvement of Elie Borowski (ironically another known illicit antiquities dealer) 13 years earlier in the collecting history of the krater highly impossible.

This alabastron is also depicted in the Becchina archive, among several other antiquities, in an image dating 24/9/1988 (see image on the right), sent to Becchina again by Raffaele Montichelli. Again the date on the image is pre-dating the collecting history given by Gorny & Mosch. However, the most significant element of this case is that it is the first example of an object reappearing after it was withdrawn following one of the previous identifications of Dr. C. Tsirogiannis.

He identified this alabastron a year and a half ago, as one of the two vases comprising lot 113, in Christie’s 15/4/2015 antiquities auction in London. At that point the alabastron was among four identifications he made and all four antiquities were withdrawn before the auction.

All four cases and the image of the alabastron were published on the ARCA blog. It seems that the owner of the alabastron is trying to sell the vase in the antiquities market of a different country, thinking that this might pass unnoticed.

As always, Dr. C. Tsirogiannis already notified INTERPOL, asking them to formally notify both the German and the Italian authorities.

One thought on “GERMANY/Munich, objects of illicit provenance on auction: Gorny & Mosch …again”