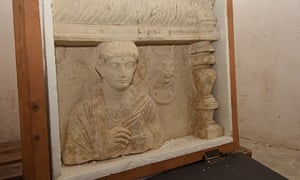 A funeral bas-relief from Palmyra in Syria discovered during a custom control on April 2013 in the free ports of Geneva. Photograph: HANDOUT/AFP/Getty Images

Swiss authorities have seized cultural relics looted from Syria’s ancient city of Palmyra, as well as from Libya and Yemen, which were being stored in Geneva’s free ports.The free ports provide highly secured warehouses where basically anything can be kept tax-free with few questions asked.

The confiscated objects, from the third and fourth centuries, include a head of Aphrodite and two funereal bas-reliefs. Most of the items reached Switzerland via Qatar and were taken by looters, Geneva’s public prosecutor said in a statement. They were deposited at the free ports in 2009 and 2010 and the alarm was first raised in April 2013 during a customs inspection, prosecutors added. It was not immediately clear when they were seized.

The customs office contacted the cultural authorities in Bern whose expert confirmed the artefacts were genuine, prompting the start of criminal proceedings in February. Three of the pieces came from Palmyra, a Unesco world heritage site devastated by Islamic State group jihadists who seized it in May 2015. Five of the confiscated objects were from Yemen.

A criminal investigation, opened in March and concluded on 22 November, has not resulted in a conviction.

“As they await restitution to their countries of origin, the objects will be entrusted to the Musée d’Art et d’Histore [in Geneva] to be eventually exhibited to the public,” the public prosecutor said in the statement. The works are believed to be in a good condition but will first be examined by the museum’s conservators, a spokesman tells The Art Newspaper. If no treatment is required, they could go on view in January or February 2017.

(the above text was copied from The Guardian and the art newspaper).