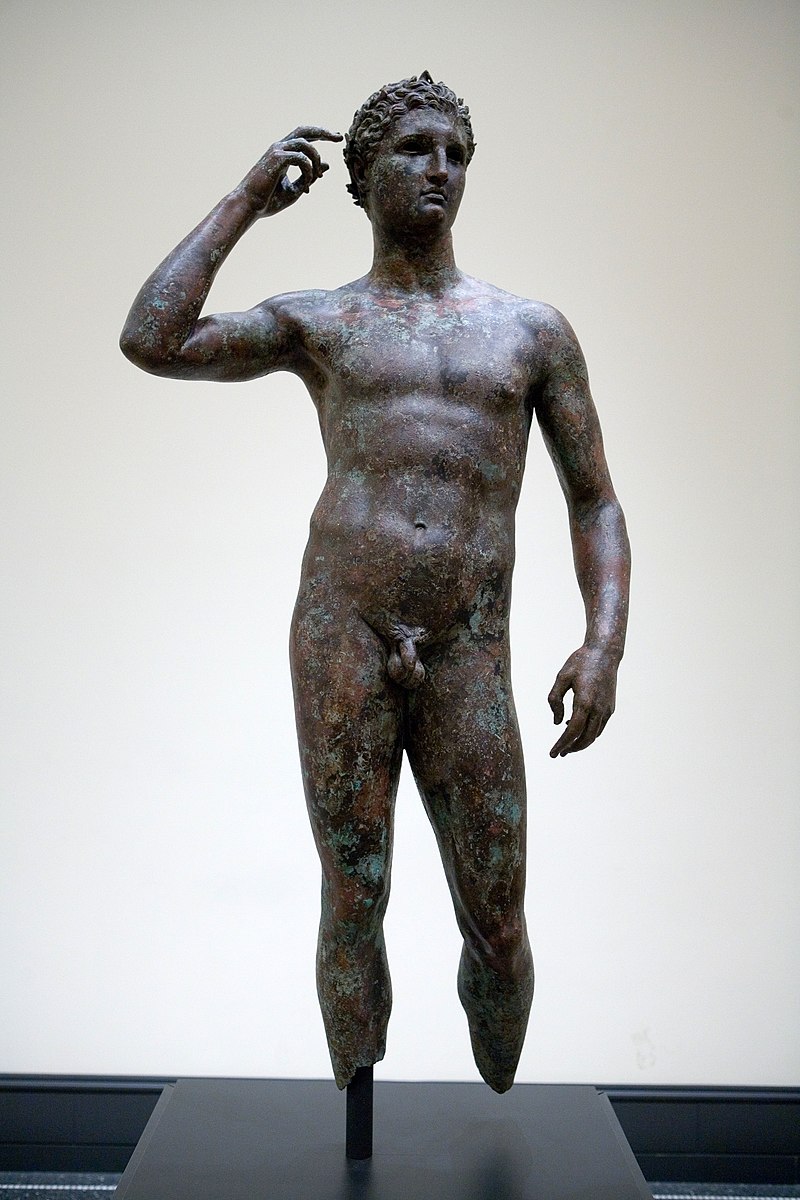 For the third time, and after years and years of battles, which started in the courtrooms of Pesaro before passing slowly through Italy’s Corte Suprema di Cassazione (Supreme Court of Cassation), only to be sent back down to the lower courts again, we finally have a verdict over the rights to l’Atleta di Fano.

Commonly known as the Statue of a Victorious Youth or colloquially as the Getty Bronze, to the Italians this stoic bronze statue is known as il Lisippo or l’Atleta di Fano.  Yet, despite Italy’s long-held claim for its return, the bronze has long held pride of place at the Getty Villa, the Los Angeles museum at the easterly end of the Malibu bluffs in the Pacific Palisades neighborhood.  There, in one of America’s most prestigious museums, the athletic youth stands with all of his weight on his right leg, crowning himself with an olive wreath, as his gaze looks out over some of the museum’s most impressive Hellenistic artworks in the California villa’s newly renovated Gallery 111.

But that may change very soon.

On June 08, 2018, in a long-awaited judicial decision, the Italian Tribunale di Pesaro issued a 50-page ordinance, written and signed by Magistrate Giacomo Gasparini who firmly rejected the Getty museum’s opposition to Italy’s order of confiscation.

Throughout the case, the J. Paul Getty Museum has stood by its original claim, that its purchase of the statue in 1977, for $3.95 million, was legitimate.  The museum’s legal team and its current director Timothy Potts have stoically maintained that there was no evidence that the statue belongs in any way to Italy, discounting the country’s claim that the object was exported out of Italy in contravention of existing Italian law.  This despite the fact that the bronze had been fished from the sea by Italian fishermen aboard the Ferruccio Ferri in 1964, who then brought the statue to the Italian city of Fano where they hid it from authorities, first, by burying it in a cabbage patch and later, by hiding it in a priest’s bathtub rather than declare their cultural find as required to the Italian customs dogana.

During those open court hearings which I attended in Pesaro, the Getty’s attorney’s maintained that John Paul Getty himself had originally walked away from the purchase of the statue, not for the reasons maintained by Italy’s attorneys, but because at the time the object was originally proffered to him, Getty was more concerned about the fate and wellbeing of his grandson, 16-year-old John Paul Getty III, who had been kidnapped from Piazza Farnese in Rome on July 10, 1973.

Justice moves slowly and will the Athlete of Fano come home?

For now, we do not know.

To understand how this complicated case has moved through the Italian judicial system it is first necessary to understand a bit more about the country’s legal system. It is the responsibility of the Corte Suprema di Cassazione to ensure the correct application of law in the inferior and appeal courts and to resolve disputes as to which lower court (penal, civil, administrative, military) has jurisdiction.  Additionally, the higher court is also entrusted with the charge of defining the jurisdiction i.e., of indicating, in case of controversy, the court, either ordinary or special, Italian or foreign, which has the power to rule on a case.

Unlike upper level courts in the United States or the United Kingdom, the Italian Supreme Court cannot refuse to review cases and defendants have unlimited appeal rights to the Supreme Court of Cassation.  This means that the Getty Museum could, if it chooses to do so, repeat its appeals process for a second time, all the way back up to the higher court extending their claim for additional years to come.

Given the backlog of criminal and civil cases pending and the lengthy process involved in delivering a ruling once an absolute decision has been handed down, cases like this one often linger in judicial limbo for many years.

To put things in perspective and to give readers an idea of how this complicates judicial resolutions, it’s helpful to look at other countries for comparison.  The United Kingdom’s Supreme Court hears approximately 75 cases per year while the United States Supreme Court generally rules on 100 to 120 case decisions annually.  In a country serving a local population that is one-fifth the size of the United States, the Italian Supreme Court of Cassation decides on close to 50,000 cases (both criminal and civil) annually.  The final administrative court, the Consiglio di Stato decides over 10,000 cases per year; while the Constitutional Court makes final decisions on around 400 cases per year.

Like other supreme courts around the world, the Court of Cassation is not tasked with re-examining the entire body of evidence in a given case.  Additionally it does not have to make rulings solely on cases that have passed through the Corte d’Assise d’Apello, Italy’s Appellate Court. Cases which meet certain criteria can go directly from the tribunal level court system to the supreme court as the Court’s role is specifically to rule on erores in iudicando and errores in procedendo (errors in procedure or application of the law).

Some criminal cases reach Italy’s Court of Cassation by first passing through the Corte d’Assise d’Apello, as was the case with the high profile murder case of Amanda Knox.  Both the defendant and the prosecution in that type of appeal case retain the right of appeal and both the Corte d’Assise d’Appello and the Supreme Court are required to publish written explanations of their rulings and decisions.

But these are the upper courts.

Before arriving at the Supreme Court or Appeal Court cases are heard by regional tribunals.  Tribunals consist of one single judge or a panel of three judges depending on the type of case being heard.  It is these tribunali which are the Italian court’s first instance of general jurisdiction in both civil and criminal matters and it is at this level, in Pesaro, that this recent decision has been handed down.

But getting back to the specifics of the case of the Getty Bronze that in some ways is as complex and hard to follow judicially as a tightly contested Wimbledon tennis match.

In 2007 the Italian Ministry of Cultural Heritage and the J. Paul Getty Trust agreed to set the question of the Victorius Youth aside pending the ongoing legal process before the Tribunal in Pesaro concerning the object’s illegal exportation from Italy.  The accord of the parties on this point was crucial as earlier negotiations in 2006 had been contentious and unfruitful due to disagreements between Italy and the Getty over the statue’s ownership status.

In 2007, in proceedings before the Tribunal of Pesaro, charges related to the illicit exportation of the Victorious Youth were dismissed upon the request of the public prosecutor on the grounds that the statute of limitations on prosecution had expired against all of the defendants in the case, leaving the Italian state with no one left to prosecute.  At the time of the requested dismissal, the prosecutor demanded the confiscation of the bronze given it had been exported out of Italy in contravention of existing Italian law.

Almost three years later, on the tenth of February 2010, Luisa Mussoni, the preliminary investigation judge at the Tribunal of Pesaro, ruled that the Victorious Youth had been exported illicitly.  As a result of this court decision, the tribunal issued an order for the statue’s immediate seizure and restitution to Italy.  This court order followed an earlier and separate order June 12, 2009 ruling on the question of the jurisdiction.

As a result of these two decisions, the Getty Museum subsequently challenged the orders’ validity before the Italian Court of Cassation on February 18, 2011. At that hearing the case was remanded back to the Tribunal of Pesaro for further examination of the merits of the case.

On May 3, 2012 Maurizio Di Palma, the pretrial judge at the Tribunal of Pesaro, once again upheld the earlier 2010 order of forfeiture and confirmed that the statue was illegally exported from Italy.  His ruling placed the case’s resolution back with Italy’s Supreme Court for what was supposed to be the case’s final ruling.

Instead in February 2014 the Prima Sezione Penale della Cassazione (First Penal Section of the Supreme Court of Italy) elected to transfer the case to the Terzo Sezione Penale della Suprema Corte (Third Criminal Chamber of the Supreme Court) where a new hearing was scheduled to establish whether or not the order of confiscation issued by the Court of Pesaro on May 3, 2012 should have been affirmed.

In 2014 the Terzo sezione penale della Suprema Corte, based on the European convention on human rights, ruled that cases must be heard in open court and that in not providing for such, the Getty museum had been “deprived of its constitutional rights” to a public hearing.  In furtherance of this, and much to the frustration of those working towards the statue’s repatriation, the Italian Court of Cassation remanded the supreme court case back to the lower court authorities in Le Marche in order to establish in open court where witnesses could be called, to determine whether or not the earlier order of confiscation issued by the Court of Pesaro on May 3, 2012 should be affirmed.

Yesterday, in his June 8, 2018 ordinance, Magistrate Giacomo Gasparini stated in clear terms that he agreed with the previous court decisions (Mussoni in 2010 and Di Palma in 2012) and wrote in favor of the object’s seizure stating, “Confiscate il Lisippo, ovunque si trovi” (English: “Confiscate Il Lisippo from wherever it is”).

Given this prestigious statue’s pride of place at the Getty Villa, the J. Paul Getty Museum would lose its substantial investment and a critical and cherished piece in their collection should they abide by Magistrate Gasparini’s seizure ruling and relinquish the statue to Italy as a result of this last affirmation. If they choose not to, they can again delay what now seems to be the inevitable, simply by tying the case up again, appealing Pesaro Magistrate Gasparini’s ruling up through Italy’s higher courts.

But what is the point?

The protracted legal challenge of this case have been so lengthy that it has been a career making case for three of Italy’s cultural property attorneys: Public Prosecutor from the tribunal of Rome, Paolo Giorgio Ferri, Italian State Attorney Maurizio Fiorilli and most recently, the next generation of Italian state prosecutors, Lorenzo D’Ascia.  Given its tenacity to fight for its cultural patrimony, and the fact that Italy would be hearing any new appeal on its own legal turf, the Getty’s legal fees might be better spent on new acquisitions and not on this long-contested object which has such a contentious background.

But having said that, the question remains as to if the director of the J. Paul Getty Museum, Timothy Potts, appointed in September 2012, will continue to fight Italy’s seizure ruling, or will he be the first in the Getty’s line of directors to acquiesce and accept defeat gracefully.

In a recent interview with Potts aired on Italy’s RAI1 television program Petrolio on June 6, 2018, just two days before Gasparini’s verdict was announced, Potts continued to grimly assert his museum’s stance.  In that interview Potts forcefully stating that l’Atleta di Fano was found in international waters and staunchly negating that it formed a part of Italy’s cultural patrimony, given that it had passed through multiple countries and was not found in Italy.

It will be interesting to see if he changes his mind after reading Magistrate Garparini’s 50 page decision.