From the art-crime.blogspot.com; published October 24, 2018.

Following a formal request by the Deputy Prosecutor for the District Anti-Mafia Directorate  Carlo Marzella, preliminary reexamination judge of of the Court of Palermo, Antonella Consiglio, has dismissed the charge of mafia association against the Castelvetrano antiquities dealer Gianfranco Becchina.  In her decision, the judge cited that the accusations used for the basis of the charge, made via testimonies given by Vincenzo Calcara, an exMafia soldier and pentiti (collaborator of justice), have been deemed “unreliable”.
The link from Matteo Messina Denaro to Gianfranco Becchina is said to begin with Denaro’s father, Francesco Messina Denaro, who was the capo mandamento in Castelvetrano and the head of the mafia commission of the Trapani region. Francesco Messina Denaro was believed to have been behind the theft of the famous Efebo of Selinunte, a 5th century BCE statue of Dionysius Iachos, stolen on October 30, 1962 and recovered in 1968 through the help of Rodolfo Siviero.
The informant Calcara, who gave testimony against the art dealer, is a former protege of Francesco Messina Denaro of the Castelvetrano family and has faced his own legal dramas related to his involvement in international drug trafficking and money laundering, some underworld activities which purportedly also implicated the Vatican bank.  Verbose mafia defector Calcara’s claims of self importance, and connections to the upper echelons of the mafia, have lethal overtones.  In the passed he has said he was originally tasked with killing antimafia Judge Paolo Borsellino in September 1991 with a sniper rifle but was arrested before he could carry out the plot. 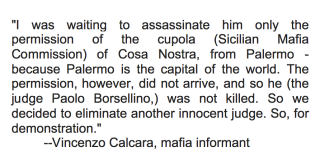 Involved in the trafficking of weapons, drugs, and political corruption Calcara was once offered a place in the government’s witness protection program but refused.  Later the Cosa Nostra determined his whereabouts and threatened his wife if she didn’t get him to stop talking to authorities.
Back in 1992, Calcara and now deceased former drug dealer Rosario Spatola incriminated Becchina for alleged association with the Campobello di Mazara and Castelvetrano clans implying that there was a gang affiliate active in Switzerland whose role was to excavate and sell ancient artefacts on the black market.  At the time of Spatola’s testimony, much of his information was also discounted as many were skeptical that he had actual knowledge or whether he invented things for his own benefit.
To dismantle Denaro’s operational funding, which authorities believe has helped him remain at large as a fugitive from justice, Italy’s Anti-Mafia Investigative Directorate (DIA), through the Court of Trapani’s penal and preventive measures section, seized all movable assets related to Becchina in November 2017 including real estate and corporate enterprises on the basis of an order issued from the District Attorney of Palermo.  This included Becchina’s cement trade business, Atlas Cements Ltd., Olio Verde srl., his olive oil production company, Demetra srl., Becchina & company srl., and Palazzo Pignatelli, once the noble residence of the family Tagliavia-Aragona-Pignatelli, which is part of the ancient Castello Bellumvider (the public part is owned by the city and houses the town hall).  Investigators also seized Becchina’s land, vehicles and bank accounts.
What will happen with the seized properties and businesses remains a manner for the Preventive Measures Section of the Trapani court to decide but given his close ties with other incarcerated mafia affiliates, Becchina’s story is not yet finished.
In 1991 Sicilian building magnate Rosario Cascio became connected with Becchina’s Atlas Cements Ltd., and took over as reference shareholder and director.  Before his incarceration, Cascio was a Mafia Associate to several bosses in multiple families including fugitive Matteo Messina Denaro with strong ties to the Castelvetrano family.   Known as the “cashier of Cosa Nostra.” Cascio once had a hit put out on him by mobster Angelo Siino only to have Matteo Messina Denaro intervene on his behalf.  Cascio managed the family’s economic activities and sub-contracts, and monopolized the concrete market and the sale of and construction equipment.  He also steered public contracts towards mafia businesses and managed an extortion racket which imposed sub contracts and labor.
So, while there are no (longer) “reliable” statements proving Becchina is formally “affiliated” with the Castelvetrano organized crime family, his connections to other individuals who are or were, and the properties connected to joint operations with mafia collaborators, are still subject to judicial consideration.