From The Guardian, written by Mary Shepperson, December 18, 2017 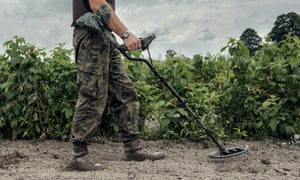 Metal detecting has a contentious history within the heritage community. Photograph: Antonio Olmos for the Observer

There’s been reason for cheer in metal detecting circles, with the news this month that 2016 saw a record number of finds reported to the Portable Antiquities Scheme. This announcement has spawned numerous congratulatory reports – including in the Guardian – detailing the wonderful things found, the back-stories of the lucky finders, and the sometimes extraordinary sums of money their finds have fetched. The rise in finds is attributed to improved detector technology and an increase in the number of people taking up the hobby, encouraged by recent spectacular finds and the popularity of the BBC’s Detectorists series.

Within the archaeological community the response has not been quite so cheerful. Several archaeologists have complained to me about the Guardian appearing to promote metal detecting as a harmless leisure pursuit, and online there’s been a distinct rumble of archaeological discontent. So why are some archaeologists upset about the swelling ranks of detectorists and the flood of important finds they’re turning up? The explanation lies in the uneasy relationship between archaeology and metal detecting which stretches back over the last 50 years. 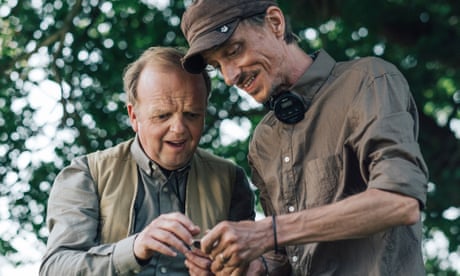 The image of metal detectorists as passionate and well-meaning enthusiasts, as portrayed in the BBC’s popular Detectorists series. Photograph: BBC/Channel X/Chris Harris

Rise of the detectorists: how to hunt for treasure

Metal detecting as a hobby first emerged in the post-war years, when relatively cheap, portable detectors developed for the army began to be made available to the public. The number of users remained small however, until more effective and affordable models gave the pastime its first flush of popularity in the 1960s and 70s.

The growing numbers of detectorists quickly came into conflict with the archaeological community. As well as fairly harmless activities, such as combing beaches, reports came in of metal detectorists increasingly impinging on archaeological sites, leaving damage and removing artefacts, many of which were finding their way to antiquities dealers or even leaving the country. Archaeologists were horrified.

As detectorist numbers spiked in the late 1970s, the attitude of the professional archaeological community became increasingly hostile. Various forms of legal restrictions on detecting and the sale of artefacts were proposed, strongly opposed by a detectorist community which was rapidly becoming more organised. The conflict culminated in the STOP! (Stop Taking Our Past!) campaign, launched in 1979 and championed by the Council for British Archaeology, with the support of a wide range of societies, professional bodies and organisations. The campaign aimed to raise awareness of the damage unregulated metal detecting was doing to the archaeological record and pushed to outlaw metal detecting in the UK.

In response, the metal detecting community launched DIG (the Detector Information Group), with a name deliberately chosen to annoy the archaeologists. DIG lobbied to prevent the introduction of any restrictions on metal detection and was supported by detector retailers and manufacturers. Both sides engaged in a dirty war of misinformation about their opponents; the archaeologists tried to tar all detectorists with the same brush as the most irresponsible and criminal elements, wantonly damaging important sites and selling off the country’s heritage for private gain, while the detectorists painted the archaeological community as elitist, establishment figures, who wanted to restrict the study of the past to their ivory towers.

The result was a total breakdown in relations between the two increasingly polarised sides. Responsible detectorists who had previously reported finds to their local museums and kept good records withdrew their cooperation. Some even destroyed their records to prevent them benefitting their archaeological enemies. Many archaeologists would have nothing to do with metal detectorists, refusing to look at finds they recovered or do anything that might endorse or legitimise metal detecting.

In the end DIG prevailed over STOP! and the legacy of that victory is still felt today; the UK has the lightest regulation of metal detecting of any western European country – in most cases, only the permission of the land owner is required – but in other countries and other contexts, what is perfectly legal in the UK would be considered as looting.

The failure of STOP! in the 1980s triggered a gradual change in the approach of archaeologists towards detectorists. The period of peak hostilities had only worsened the problems of destructive detecting. Huge quantities of artefacts were disappearing unseen into private collections or overseas, Nighthawking – clandestine illegal detecting – at scheduled monuments had increased, leading to high profile episodes such as the extensive looting of the Romano-British temple at Wanborough in Surrey in the early 1980s and persistent attacks on the Roman town of Corbridge (which continue to this day).

After their failure to restrict metal detecting, archaeologists had no choice but to swallow their anger and try engagement. Responsible detectorists and well-run societies were to be encouraged, advised on how best to record their finds, and given a level of legitimacy. In turn, they would help to police their fellow hobbyists, encouraging responsible practices and casting out the bad apples who brought the activity into disrepute. For their part, archaeologists would gain access to the material found by detectorists though organised reporting.

Cooperation and engagement has now been the accepted position of the archaeological community towards metal detecting in the UK for over twenty years, paving the way for the 1996 Treasure Act and the Portable Antiquities Scheme, which records detector finds across the country and makes the data available to researchers. Many metal detecting clubs enjoy close and mutually beneficial relationships with their local archaeology units, sharing information and sometimes working together in the field.

However, it would be a mistake to think that archaeologists now live in perfect harmony with detectorists; distrust on both sides still bubbles under the surface. Many parts of the metal detecting community remain wary of archaeologists, suspecting (probably rightly) that, if they could, archaeologists would place greater restrictions on metal detecting. On the other side, most archaeologists privately believe that even responsible detectorists to do more harm than good, and the more extreme among them see all metal detectorists as little more than legalised looters driven by personal greed. For many archaeologists cooperation is a form of damage limitation; the least worst solution.

Metal detecting encompasses a wide range of individuals, from the responsible society members with a genuine interest in the past, to the criminal Nighthawks, and all the detectorists who occupy the large grey area in between. The innocent and honest majority, groups like the cuddly, nerdish club depicted in Detectorists, champion metal detecting as a citizen scientist movement, democratising knowledge and encouraging a love of heritage.

The problem for archaeologists is that metal detecting is fundamentally acquisitive, competitive, and potentially lucrative. It encourages a monetised view of archaeological objects and the temptation to bend or break the rules is strong. A particularly awful recent example occurred this spring when policeman David Cockle was jailed for metal detector crime. Not only had he illegally sold a hoard of gold Saxon coins he’d found in Norfolk, he had tried to conceal his crime by misreporting the nature and location of his finds, feeding false data into the county records. The man had been a detectorist for thirty years.

My friends within the archaeological community have a wealth of similar stories and bad experiences. Many have worked on excavations where they’ve returned in the morning to find trenches damaged and objects stolen in the night by criminal detectorists. One discovered that the metal detectorist assisting on an excavation was only reporting worthless coins to the project and pocketing the valuable ones for himself.

In the context of past conflicts and the more recent uneasy truce, it’s not surprising that news of a growing and re-energised detectorist community wielding more effective equipment has been met, at least privately, with dismay from many UK archaeologists. So, if you’ve recently taken up metal detecting and meet your local archaeologists down the pub this Christmas, you shouldn’t necessarily expect them to buy you a drink.