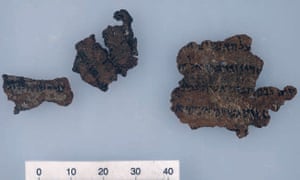 A photograph of a purported Dead Sea Scroll fragment. Experts have cast doubt on its authenticity. Photograph: Schøyen Collection

A multimillion-dollar trade in fragments of the Dead Sea Scrolls fuelled by a surge in interest from wealthy evangelicals in the US includes a significant number of suspected forgeries, two prominent experts have said. On scholar said the problem was so serious that up to 90% of the 75 fragments sold since 2002 could be fakes. Six of 13 fragments bought by Steve Green, owner of the US arts and crafts retail chain Hobby Lobby, are among the potential fakes, another expert said. The figures involved in these private sales are jaw-dropping: individual fragments can sell for well over $1m.

The discovery of the scrolls in the middle of the last century electrified the study of the early bible. Written largely in Hebrew, and dating largely from the last three centuries BC to the first century AD, the scrolls include sections of the Hebrew bible 1,000 years older than any previously known copy. In purely academic terms, the scrolls revolutionised the understanding of the practices and beliefs of the period of rabbinic Judaism from which early Christianity emerged. Bedouin shepherds stumbled on jars containing the first scrolls in the mid-1940s. Thinking them of little value, they sold on pieces of their find to a Palestinian Christian cobbler and part-time antiquities dealer, Khalil Eskander Shahin, nicknamed Kando.For years an association between the Kando family and the scrolls was seen as a stamp of authenticity in a trade peopled by flamboyant scholars and elusive middlemen.In the early noughties, dozens of new fragments began to enter the market after Kando’s son, William, unlocked a family vault in Zurich.

A new market, and new problems

Around the same time, a new generation of evangelical buyers in the US with a keen interest in objects related to the time of Christ came to prominence, chief among them Steve Green. His family of devout Texas Christians and social conservatives have been on a buying spree in the name of Hobby Lobby to furnish the Museum of the Bible, a Green-funded project that opened in Washington DC on Friday.

Money is no object in their hunt for antiquities, which has previously brought them before the US justice department. In a July settlement with federal prosecutors in New York, the company agreed to forfeit 5,500 artefacts illegally imported from Iraq that it had bought from a dealer in December 2010. “We should have exercised more oversight and carefully questioned how the acquisitions were handled,” Hobby Lobby said in a statement at the time. The evangelical interest in the scrolls is focused on texts drawn from the books of the Hebrew bible. “There is this sense of [bible fragments] bringing you closer,” said Kipp Davis, an associate of the Dead Sea Scrolls Institute at Trinity Western University. “To be part of and touching and experiencing something that close to God and Jesus.”

Davis was asked by the Museum of the Bible’s publications team to be part of a team involved in the examination of 13 fragments bought by Green. “There is a spectrum of authenticity [and] I put six of the Green family fragments close to the forgery side of the spectrum,” Davis said. “But at this stage, because of the lack of provenance, there is a possibility that all of them could be fakes.”

Davis said the handwriting and the content of the texts themselves were red flags with the post-2002 fragments – a position also taken by Arstein Justnes, another scrolls expert, from Agder University College in Kristiansand, Norway. “You can see that the hand [in the suspected forgeries] is hesitant or imitative,” Justnes said. “It is not a scribe’s hand. It is a naive hand. Or even hands. The other problem is that a number of the fragments look like they are not actual pieces of a scroll. It looks like the letters have been made smaller to fit the edge of the fragment.” Justnes noted another puzzling anomaly: since 2002 the proportion of fragments appearing on the market that come from the books of the bible has jumped from about 25% to 86%. To his mind, that discrepancy suggests someone is producing exactly the pieces being sought by evangelical buyers.

The Guardian has approached Green about the concerns raised by Justnes and Davis but has not received a reply. Suspicions about the Green scroll pieces have been given added weight by the physical examination of other fragments bought by another collection during the same period. Davis, Justnes and several other scholars, including some from Berlin’s Federal Institute for Materials Research and Testing, were asked to look at fragments owned by the Norwegian collector Martin Schøyen for a book accompanying an exhibition. They published their findings in the journal Dead Sea Discoveries in October. The results appear damning.

In one fragment, sediment that should appear on the surface was evident beneath the ink. Another appeared to have been sprinkled with crystals of modern table salt. One crystal was apparently stained by the underlying 2,000-year-old ink – seemingly impossible if the fragment was genuine. In a statement released in October, Schøyen seemed to agree that forgery had been a problem in “15%” of recently traded fragments, including his own. In a more recent statement sent to the Guardian, he cast doubt on the validity of examining ink on the fragments. “The suggestion that they are forgeries rests on the possibility that the ink may be modern,” the statement said. “However, carbon-14 testing of the ink cannot be reliably carried out on such small fragments. There is not enough ink required for statistically significant testing and an ink sample will also be polluted from the parchment and its deposits. Therefore, the conjecture that these specific fragments may be forgeries rests alone of the interpretation of palaeography and the texts.”

Justnes told a gathering of scholars in Berlin this year that since 2002 “more than 75 previously unknown Dead Sea Scrolls fragments have surfaced on the antiquities market. Almost all of them are linked to William Kando – sometimes directly, sometimes only tenuously. “Why is the Kando connection so important? [Because] in practical terms, a link to the Kando family has been the only way one can justify introducing new fragments into the [academic] dataset close to 50 years after the last Dead Sea Scrolls were found.” The Green family has not disclosed the source of its 13 fragments, but the Guardian has established that almost half were bought from William Kando, and that Steve Green visited the Kandos’ vault in Zurich to view fragments. Schøyen also purchased his fragments from – or with the assistance – of William Kando, as did another purchaser, Dorothy Patterson. Patterson, who bought scroll segments for Southwest Baptist University in Missouri, is less reticent than other major recent purchasers and remains convinced that her fragments are real. However, her account illuminates key aspects of the recent trade in fragments, not least its extremely ad hoc nature. Patterson told the Guardian that she had known the Kandos for many years, including the elder Kando, whom she first met while leading bible tours to the Holy Land. Seven years ago, while she was visiting William Kando’s shop, he first broached the subject of selling her some fragments. “We were in the shop … when William called me aside and said: ‘Dorothy, the family has decided that we are going to sell some of our remaining fragments.’” Lacking the expertise herself to authenticate the pieces, Paterson consulted with experts and raised the necessary funds, before being summoned to a meeting in Zurich with Kando. “[William Kando’s] bank officer was there. They brought out the fragments so I could see the condition and everything,” she said. Armed with a checklist that she said had been provided to her by expert – an unusual method of authentication for a major purchase in a field outside a scholar’s expertise – Patterson viewed the fragment she planned to purchase. “I had my notes,” she said. “I was able to check everything.” Patterson insisted the Kando connection was what convinced her of authenticity. “The senior Mr Kando is the one who received more [scrolls] than any other one person from [the Qumran] caves. [The Bedouin] came to him because he was a dealer in Bethlehem and they trusted him. So he is number one the person who received more than anyone else.”

In his shop in east Jerusalem, William Kando denied emphatically that any of the fragments associated with him – either sold directly or via intermediaries – were forgeries, even unknown to him.He described the scholars who questioned the fragments as “stupid” and suggested they had malign motives. At first Kando said he would not talk about money. But then he said he had sold seven fragments to Steve Green, and claimed that Green had offered him $40m at a dinner in Switzerland for one piece held in the vault in Zurich. Kando also said he had sold fragments to Schøyen. “It is not possible we were misled,” Kando insisted. “These fragments are 100% [genuine]. It is pure animosity.” The fragments in the Zurich vault were purchased from the family of a relative in Lebanon, Kando said. “They were found in a box by a professor who checked them for my father. This was in 1966. My father kept the box with a cousin in Lebanon and then when the [civil] war in Lebanon began my cousin went to Europe. After the death of my father and after the cousin also died, we gave the money to his family and we got back all the fragments [from the box] and kept them in Switzerland. I think there are now 28 pieces left.”

Asked whether it was possible that someone else could have been selling forgeries to clients such as Green and Schøyen, Kando was dismissive. Ira Rabin, an expert in inks and parchment from the Federal Institute for Materials Research and Testing in Berlin, undertook some of the physical tests on the Schøyen fragments. He said there was only one way to dispel the doubts. “[William] Kando has to be open about the vault in Zurich. He has to open it and show it, and show what has been on the market,” Rabin said.