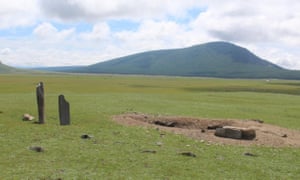 A looter’s pit beside two Bronze Age monuments. These are not grave sites, but the structures around them contain the bones of domestic animals – worthless to looters, but with incredible scientific value. Photograph: William Taylor

It’s a sunny, late summer day in northern Mongolia’s Darkhad Basin – a large glacial lake basin nestled against the country’s Russian border. To the south stretch the grasslands of the Eastern Eurasian Steppe; to the north, the Siberian boreal forest. We stand – almost precisely – at the place they meet, at the forest’s edge overlooking a large, grassy valley the administrative district of Ulaan Uul. We’ve come to this site, known locally as Khorigiin Am, in response to reports from local herders of bones and artifacts lying on the ground surface. What we find is shocking –scraps of silk, hastily scattered pieces of wooden artifacts – and bone, human bone, everywhere.

My companion, Dr J Bayarsaikhan, finishes a tally of the looted burial craters that dot the hillside. “More than forty,” he tells me, surveying the scene in front of us with dismay. We work through the evening to salvage what we can from the dozens of looted burial mounds, which from the fragmented artifacts we find, appear to date to the time of the Great Mongol Empire – around 800 years ago.

Mongolia’s cold, dry climate can sometimes result in incredible archaeological discoveries, preserving organic materials like ancient clothing and weaponry that might otherwise have disintegrated. However, looting makes short work of these rare finds. “[Organic artifacts] are more unstable than some other kinds of artifacts, like stone or metal” says Sandra Vanderwarf, a cultural heritage preservation fellow at the American Center for Mongolian Studies (ACMS), who works at the National Museum of Mongolia.

When materials such as skin, sinew, or seeds are recovered from archaeological sites, researchers get a rare glimpse of information like how the object was made, what kinds of animals and plants were used to produce it, or where these animals and plants came from. Over time, these little bits of rare archaeological data come together to help us understand processes like migration, globalisation, and human responses to climate change – forces that are rapidly shaping our modern world.

Looters sell or destroy these rare objects, exposing whatever may be left to the elements, where they quickly disintegrate through exposure to weather, sun, animals, and people. It’s difficult to say how long the scraps of decorated silk or finely incised bone and bark we recover may have already sat at the surface, decomposing – but the looting appears to have been recent. Nonetheless, much has already been lost.

As one of the world’s largest countries by geographic area, but smallest by population density, the logistical challenges of protecting archaeological sites or enforcing punishment against looters in Mongolia are overwhelming. “Because to date there have been no monitoring efforts, we can’t say just how bad it has become” says Dr Julia Clark, an archaeologist and the Cultural Heritage Director at ACMS. Clark has also noticed that archaeological research projects can actually encourage and guide the efforts of looters, who might otherwise have left sites undisturbed. “Unfortunately,” she says, “people sometimes think that we’re stealing gold and treasure, and want to get some for themselves.” With few resources to allocate towards anti-looting efforts, anonymity is the only line of defence for many of the nation’s archaeological sites.

This looting has serious consequences for Mongolia, and for the rest of the world. Many of us outside of Mongolia know little about the country or its history, beyond what we glean from dramatised or fictional depictions in popular culture, like Netflix’s popular (if critically maligned) Marco Polo series. As a result, the nation’s contributions to global cultural heritage have gone largely underappreciated. This problem is compounded by the scarcity of historical documents produced by ancient nomadic peoples – meaning that history was often written by outsiders, who tended to emphasise military brutality rather than highlight cultural achievements. With its rich material record of the past, archaeology provides a complementary, alternative lens into the people, animals, and history behind the great Khans and the peoples that came before them.

“To most [foreign] people,” says Dr Bryan Miller, a postdoctoral research fellow at Oxford University specialising in Mongolian and Chinese history, “Mongolia is Genghis Khan. But he’s seen as this kind of spark. He didn’t just come out of nowhere.” To understand the full story behind the Mongol Empire and appreciate its legacy for the modern world, Miller says, we need to protect and study the region’s history (and prehistory).

The situation, though bleak, is far from hopeless. In a televised speech on the floor of the Ikh Khural (National Assembly), representative G Munkhtsetseg acknowledged the struggle faced by those working to protect cultural heritage in Mongolia, and expressed a desire to support and listen to their voices going forward. For Mongolia’s beleaguered cultural heritage professionals, the words were a welcome change. In recent years, Mongolia has also managed to pass legislation mandating archaeological survey for mining projects, and for the first time, instituting harsh penalties (including prison time) for those convicted of looting or trafficking in antiquities – resulting in some important victories by local law enforcement.

Through the education and public outreach efforts of archaeologists at the National Museum and the country’s other major archaeological research institutions (including the National University and the Cultural Resource Management Division at the Institute of Archaeology/Mongolian Academy of Sciences), a new generation of students and herders are learning the importance of archaeology and its relevance to their history and heritage. In many areas, local people have become dedicated stewards of the monuments and sites in the area they live. Clark, Bayarsaikhan, and their colleagues are working to develop programs which help quantify and monitor looting, as well as educate others about the goals of archaeology and the damage caused by looting.

Cultural heritage protection is not just Mongolia’s problem. As the United States’ recent withdrawal from the international UNESCO agreement demonstrates, it is instead an urgent, global issue – one that is unlikely to recede in coming years. For archaeology to stay relevant, researchers and authorities alike must demonstrate its value in the public eye – even in times of economic crisis and limited political support. Doing that means teaching the public, particularly younger generations, that studying and protecting the past is the only way to understand our future. “It’s a fight that we are never going to stop fighting,” says Miller. “But at least we have to try.”

Special thanks to S. Solongo at the Fine Arts Zanabazar Museum for her assistance with this story.