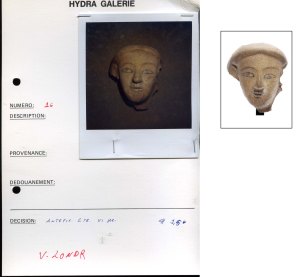 This Monday, November 7, our committee member Dr. Christos Tsirogiannis, senior archaeologist at the Cambridge Archaeological Unit, University of Cambridge, identified an Etruscan terracotta antefix (lot 14) in the forthcoming Bonhams auction in London, on November 30th, 2016, as deriving from the Medici archive (see images on the right). But the collecting history given by Bonhams does not include Medici:

It seems that Bonhams did not contact the Carabinieri before compiling their auction catalogue, in order to verify that this antefix is not depicted in the archives confiscated from illicit antiquities dealers. Dr. Christos Tsirogiannis notified the case to the Art and Antiques Unit of Scotland Yard and INTERPOL, who then notified the Carabinieri, as the piece is definitely and only Italian.
One day later, on Tuesday, November 8, Bonhams withdrew the antefix.